Liquid resins are used in two main ways in encapsulations processes. The first methods is glob top and dam & fill alternatively known as frame & fill. The second method is Casting and Potting that can be used to encapsulate sensitive electronics as well as opto-electronic devices. In the case of LEDs they can be both cast or potted.

What is Potting and Casting?

Casting and Potting can be used to encapsulate sensitive electronics as well as opto-electronic devices. In the case of LEDs they can be both cast or potted.

When an LED is cast, liquid resin is poured into the LED chamber and cured into the shape of the cavity. This produces a stand-alone device which can then become a component in another printed circuit board assembly.

There are three main types of liquid resin for potting and casting applications: Epoxy, Polyurethane, and Silicone.

Epoxy resin cures relatively slowly especially in smaller volumes, and so may require fast-cure hardeners that generate an exothermic reaction that may damage sensitive electrical components via mechanical stress on both the components and circuit. 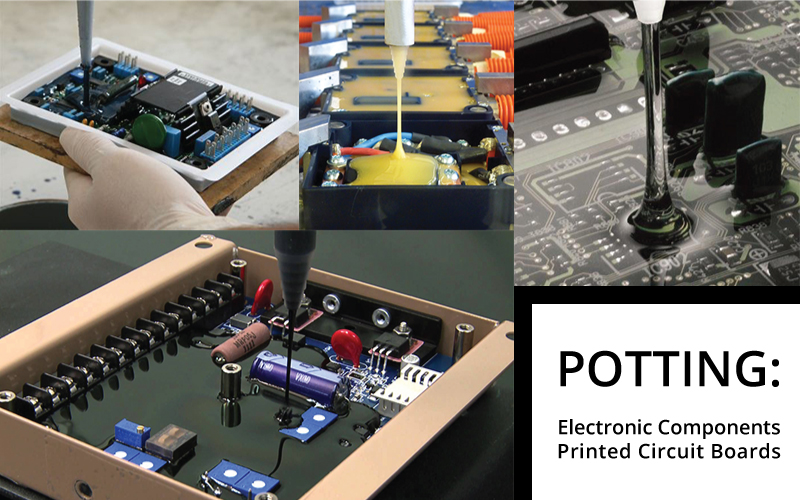 Polyurethane resins are the kings of process adaptability. Almost every single characteristic of the final cured resin can be dialed in and regulated by adding a little more or a little of a certain additive. Hardness, cure speed, color, gel time, viscosity, all of these can be easily adjusted to suit production requirements.

Polyurethanes cure faster and at lower temperatures than epoxy,

Polyurethanes have a low elastic modulus in their cured state they are better for extra delicate components such as sensors and reed switches. However, they are notorious for high moisture absorption unless a Polybutadiene base is used. 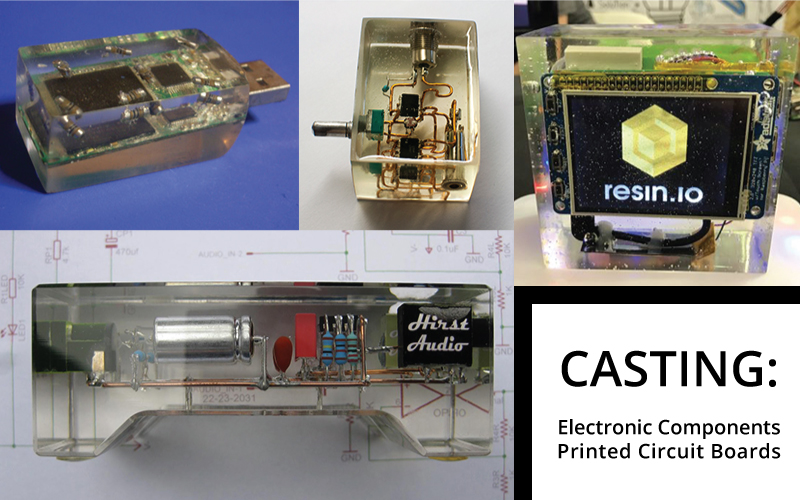 Silicone resins have the lowest elastic modulus when cured of all liquid resins. They have great high-temperature and chemical resistance too. Silicone resins also cure with almost no exothermic heat making them great for encapsulating highly heat sensitive components.

The LED share of the lighting market is set to shift from 20% to 70% by 2020, which means the overcoming years LED encapsulation will be one of the fastest growing markets for liquid encapsulation. Liquid casting and encapsulation, in general, is more adaptive with high flexibility and low throughput which matches the market trends of more diverse low quantity orders rather than long-term high quantity orders.

Liquid Epoxy resin used to the king of potting and encapsulation, however, epoxy seems to be running out of room for further developments and the most exciting developments in liquid resins seem to be in polyurethane resins. This is also because polyurethanes can be so easily adapted and so better suits the current economy of diverse smaller quantity orders.

CAPLINQ OPTOLINQ™ OLS-Series are a family of optically clear (often called “water-white”) liquid encapsulants that are used to encapsulate optical or optoelectronic devices that require both a high level of light transmittance as well as a good level of mechanical protection. Products in this OLS-Series family can be epoxies, silicones or hybrid technologies. They are used extensively for the encapsulation of LED devices but could be well suited for other applications that require a clear, optical grade encapsulation system.