Not all Epoxy Molding Compounds (EMC) or duroplast materials have good electrical stability. In fact, despite EMC basically having very good insulation properties, good electrical stability - particularly at high temperatures - is not a given. Below is a list of our most highly electrically stable epoxy molding compounds. These are the ones with the lowest ionic content, the highest dielectric strength, the most stable dielectrics and the lowest ionic conductivity over the widest possible temperature range.

Why is high electrical stable desired in an epoxy mold compound

What exactly is an HTRB test?

A "High Temperature Reverse Bias" test is a common reliability test that exposes the power devices (and hence the EMC) to the "worst case scenario" under which it must perform and not fail. During the HTRB test, the power semiconductor devices are stressed at the maximum rated reverse breakdown voltage at a temperature close to their maximum rated junction temperature (Tj max) over a defined period of time. As such, a HTRB cannot be completely understood until the variables of voltage, temperature and time are defined.

What is Ionic Mobility?

Otherwise known as Electrical Mobility, it is the ability of charged electrons or protons to move through a substance (in this case epoxy mold compound) in response to an electric field that pulls them.

What is Reverse Bias?

Basically, semiconductors allow current to flow in one direction: from the p-type (positive) to the n-type (negative). Reverse bias is applying direct current (DC) voltage to prevent current flow in a diode, transistor or similar. Wikipedia has a good desription in Reverse Bias

What is the relationship between Permittivity and Dielectric Constant?

What is the ionic content in epoxy mold compound that causes semiconductor device failure?

There are four main elements that should be minimized in epoxy molding compounds. There are Chlorine (Cl-), Sodium (Na+), Fluorine (F-) and Potassium (K+), where chlorine and sodium are the most important. All the ionic content shoudl be kept under 20ppm for each individual element and less than 5ppm is desired for Chlorine and Sodium.

Epoxy Molding Compounds (EMC) by their nature have very good electrical insulation properties. Epoxy Mold Compounds are often called "functional epoxies" or "high solid epoxies" because they are heavily loaded with fillers. These fillers, (typically silica, though other fillers are used for other properties such as thermal conductivity) are loaded more than 50% by weight be default. Highly filled systems have weight % filler loadings higher than 70% with "very highly filled loadings" as high as 92% filled by weight.

These highly-filled systems provide epoxy molding compounds with very good dielectric strength and a very high breakdown voltage, which themselves are good electrical insulation properties. These two values however are poor indicators of what is meant by "Good electrical stability" for EMCs

What is good electrical stability for Epoxy Mold Compounds?

Good electrical stability means that there is very little ionic movement within the epoxy mold compounds when semiconductor devices are under reverse bias at elevated temperatures. The High Temperature Reverse Bias (HTRB) reliability test is an excellent industry-developed and accepted test that tests the electrical stability of EMCs

Epoxy mold compound that are considered to have excellent electrically stability are thus those that:

There are two main causes of poor electrical stability in EMCs:

Epoxy molding compounds are made up of many components including epoxy resins, curing agents, catalysts, fillers, pigments and additives. Each of these ingredients can contain ions in the form of chlorine (Cl-), Sodium (Na+), Fluorine (F-) and Potassium (K+). There are elements other than these that have ions, but these are the ions most frequently present and in the highest quantities - therefore are of the greatest interest. As you can see next to the elements listed, Chlorine and Fluorine both have negative (-) ions and Sodium and Potassium both have postitive (+) ions.

Of these four elements, the biggest culprits are Chlorine (Cl-) and Sodium (Na+). If the total ionic content is too high, or the ionic content of each of the Chlorine or Sodium is too high, then the risk of gate current leakage and device malfunction increases. In all semiconductor applications, it is prudent to have the total extractable ionic content to be less than 80ppm and the extractable content of each element to be below 20ppm. In high power semiconductor applications which operate at higher voltages and higher temperatures, it is better to have the total ionics to be below 20ppm, and of each element to be below 5ppm. As application temperature and power increase, the lower the ionic content the better.

When exposed to the electric field caused by the DC voltage applied, these ions have a tendency to move. If they move too much, a gate current leakage occurs and gradually increases which ultimately leads to the device malfunction.

Different combinations of epoxy resin and hardener, will provide different ionic conductivities of the base epoxy. Specifically, as illustrated in Figure 1 below, a standard epoxy cresol novolac resin with a standard phenolic resin might have a low permittivity at lower temperatures, but quickly elevate at higher temperatures leading to gate current leakage failures for power semiconductor devices.

Why is good electrical stability important for epoxy molding compounds?

How can epoxy mold compounds be formulated for good electrical stability?

Epoxy mold compound formulators can develop materials that will pass the HTRB test by developing EMCs that:

How to select epoxy molding compounds with excellent electrical stability?

When looking for epoxy molding compounds that are very electrically stable, look for the following chanacteristics: 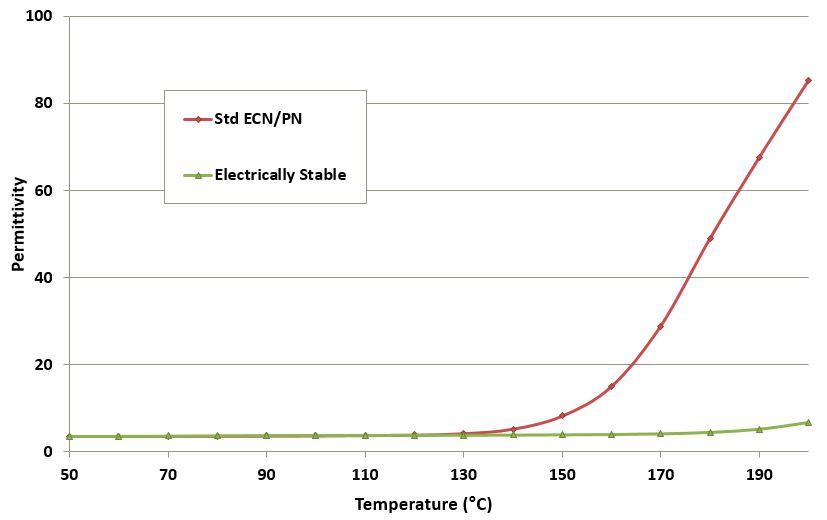 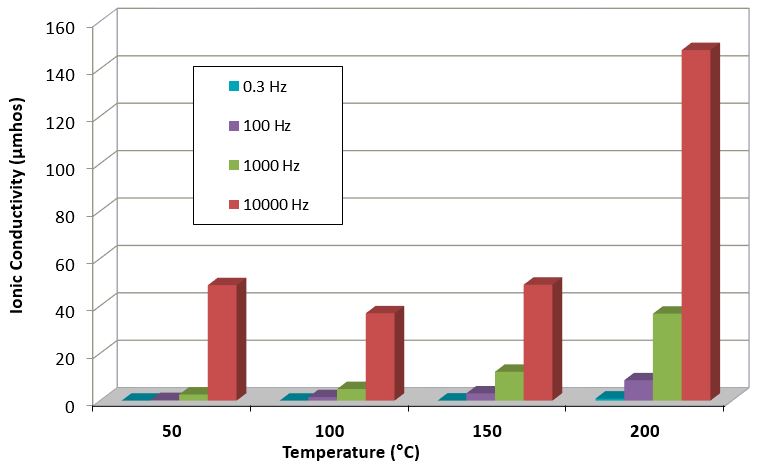