EMC manufacturer cannot determine a product's MSL performance since the packages have way too many variables. This makes us state MSL levels based on past experiene, case studies and certain package types that should be able to reach said MSL performance.

But this can never be a guaranteed specification. Given the wide range of packages, it is impossible for Epoxy Mold Compound manufacturers to guarantee MSL performance. Instead, EMC manufacturers have learned that all other things being equal, Epoxy Mold Compounds with the following characteristics have a better chance of providing better MSL performance:

Scanning Acoustic Microscopy in C mode produces a two dimensional image of ultrasound echoes reflecting up to a specified depth. It is very sensitive to defects on the interface such as air, voids, gaps that are a result of the delamination of the die pad, leadframe or any part of the package. Since echose won't travel through the air gaps, it has a very high efficienty and reliability on detecting delamination and distinguishing between good and bad packages. On the same note it detects cracks and any other failure mode that might affect the reflection of the ultrasound.

Factors that can create popcorning: 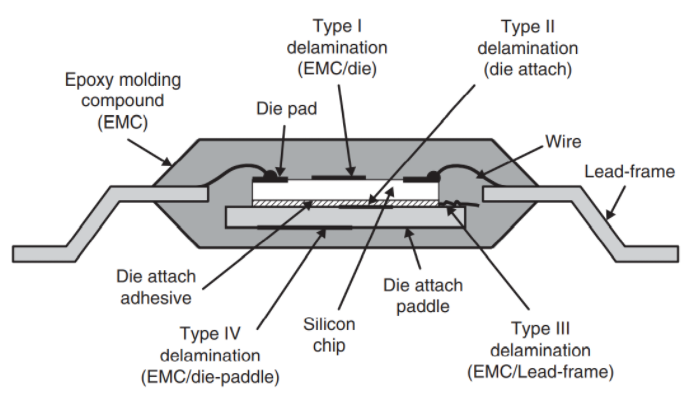