Industrial epoxy molding compounds are tough composites with excellent thermal shock and thermal cycle resistance. Their chemistry is well-suited for molding large parts, minimizing the potential for crack development while maintaining excellent color stability up to 180°C. Even though the vast majority of industrial EMC is reinforced with Fiberglass to provide additional toughness, there are also plain silica epoxies that provide great price/performance ratio for high voltage applications.

Fiberglass is not the only main characteristic of Industrial EMC. The choice the of curing agent or hardener is also an important aspect that give Epoxy Molding Compound very specific post cure material properties. In our case it is Anhydride that is used as the leading industrial EMC hardener. The definition of an anhydride is the compound obtained by removing the elements of water from a particular acid, an organic compound containing the group —C(O)OC(O)—, derived from a carboxylic acid.

Some of the unique benefits offered by anhydride cured epoxy molding compounds are low mix viscosities for long flow molding, excellent electrical insulation properties, low ionic movement at elevated temperatures that leads to very stable electrical properties at high temps and the very good temperature stability that leads to longer shelf and pot life. Those are on top of the already mentioned excellent mechanical and thermal properties

Not anymore. It has historically been true that anhydride-cured epoxies had a glass transition temperature (Tg) that was lower than 150°C. Modern-day epoxies using an ahydride curing agent can have Tgs above 200°C.

Are there any downsides to anhydride curing agents?

Yes. The biggest downside to anhydride-cured epoxies these days is the high moisture absorption during cure. Epoxy cresol novolacs and other phenolic-based curing agents have moisture absorptions that are lower than those obtained with anhydrides. For large devices requiring high MSL performance, this can be an issue, but for discrete through hole devices, this should be no problem at all.

Is there only one anhydride curing agent?

No. there is a wide range of anhydrides one can choose from, and the industry is always developing new types. Among these choices are:

Each of which offer further unique material properties.

What are the main EMC ingredients?

Epoxy Molding Compounds basic building blocks are made of the following ingredients:

In a world of  stringent environmental controls and ever hotter operating temperatures, epoxy mold compounds are getting a bad reputation. This reputation is not only misplaced, it often misses the point completely.

Anhydride curing agents are some of epoxies oldest curing agents, and probably the most widely used curing agent in epoxy molding compounds’ 75+ year history. This is not a coincidence. Although epoxy molding compound chemistry has evolved over these same 75 years into novolacs, phenolics, bismaleimides, and multi-aromatic resins, anhydride chemistry still holds an important place not only in history but also in the future as. This section will concede that the use of anhydride epoxy mold compounds may be sunsetting for some applications, but it is still the best choice for a wide range of other applications.

In order to talk about the future of anhydride chemistries, it’s important to highlight, discuss and debunk some known myths about anhydrides

The Substances of Very High Concern or SVHC list is a list of chemicals (substances) created by the European CHemicals Agency (ECHA) to record substances that have been tested deemed to be either:

Furthermore, new developments and research have identified many new types of anhydride formulations that are quite different than the older anhydrides and aren’t expected to ever make it onto the ECHA SVHC list.

This said, it’s important to point out that anhydrides are hardly a black sheep in this respect. Not using anhydrides in epoxy mold compound formulations does not preclude it from having substances that will end up on the SVHC list. Many other types of epoxy formulation chemistries, including multi-aromatic resins, bismaleimides, novolacs, and phenolics have used substances that have found their way onto the SVHC list.

To add insult to injury, engineers often mistake a material’s glass transition temperature (Tg) for its maximum operating temperature. While it is true that a materials’ physical properties - including its coefficient of thermal expansion (CTE) and Flexural Modulus (E) – do change at a material’s Tg, these are not signs of material degradation. In many cases, these properties go through a perfect hysteresis meaning that the material’s original CTE and modulus are reverted once the temperature is returned below its Tg.

But don’t take our word for it, the proof is in the pudding as they say. The Underwriter’s Laboratory (UL) has designed a UL-Approved Electrical Insulation system (EIS) class which are based on the maximum "hot spot" in the system. (See Table 1) . Manufacturers have been formulating two anhydride chemistries, MH6-0504 and MH6-0510 for over forty years that are in use on applications that have a Class H rating, meaning they can be used in applications that can see temperatures up to 180°C. 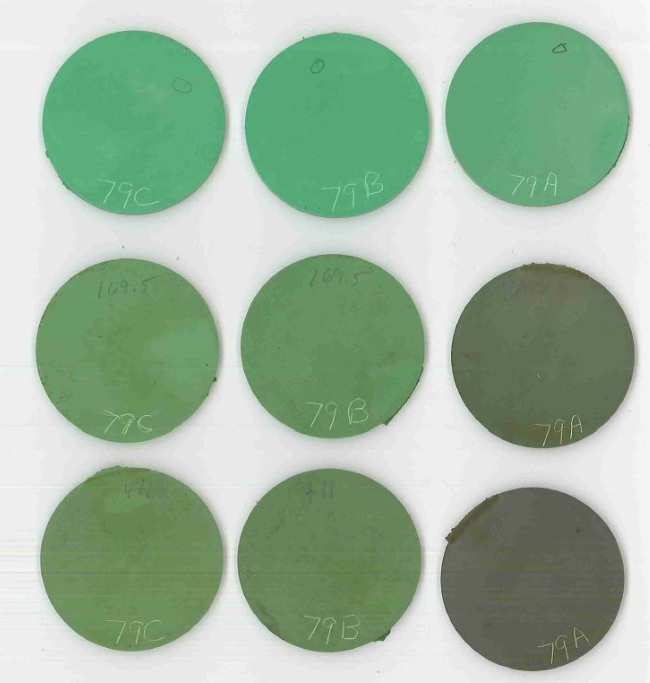 Figure 1: Anhydride chemistry is much more color stable at 180°C then novolac chemistry

Concern 3: Anhydrides have a higher moisture absorption than other chemistries

Moisture absorption tests measure the amount of moisture that epoxy mold compounds absorb after post mold curing and exposed to high moisture environments. Three standard tests for this include:

A significant amount of epoxy mold compounds are used in the manufacture of semiconductor devices. In semiconductor applications, epoxy is used to encapsulate the semiconductor chip, thus providing both mechanical and environmental protection.

What was discovered was that in the absence of this prebaking step, semiconductor devices that contained too much moisture would fail catastrophically during this reflow step as moisture trapped within the epoxy mold compound would expand and cause delamination from the semiconductor device, break critical wirebonds and separate from the leadframe in a process now coined “popcorning”.

MSL tests are very useful for PCB manufacturers as it gives them a common guideline they can adopt for their semiconductor device suppliers. For epoxy mold compound manufacturers, on the other hand, the criteria is more abstract as the semiconductor devices range wildly in size, shape, and materials used. There are literally thousands of different combinations when one considers all the potential variables – a number that has only increased in modern times as devices types and materials continue to evolve.

Fortunately for epoxy mold compound manufacturers, there are three main material properties that will indicate whether an encapsulant will have better MSL performance than its predecessor or competitor:

A higher adhesion to the substrate is logical as an unbroken bond will not fail, and the matched CTE will be discussed more in the next section, but the last point brings us full circle on our discussion of the importance of low moisture absorption.

So what happens if there is no high-temperature solder reflow step, as there weren’t in discrete, through-hole components or in other, non-semiconductor applications? Then moisture absorption values become less relevant, and the whole concern over “higher moisture absorption” of anhydride chemistries no longer holds water, as a humorous chemist may say.

Concern 4: Anhydrides’ CTE’s are too high for modern-day applications

As explained in the section above, it is important for semiconductor device manufacturers using epoxy molding compounds to select encapsulants that “match” the coefficient of thermal expansion of their leadframes and substrates. Refer to Table 3 for the list of typical material used in the semiconductor industry.

The reason this is so critical in semiconductor devices manufacturing is that the dimensions are so tiny (measured in microns and nanometers) and the stresses caused by the high-temperature solder reflow process are so high, that even the slightest CTE mismatch can cause catastrophic semiconductor device failure.

This phenomenon has only been exaggerated over the past decade as semiconductor devices have gotten even smaller, manufacturers have moved to even higher temperature reflow profiles to accommodate lead-free solders and PCB assemblers have insisted on ever-higher MSL performance.